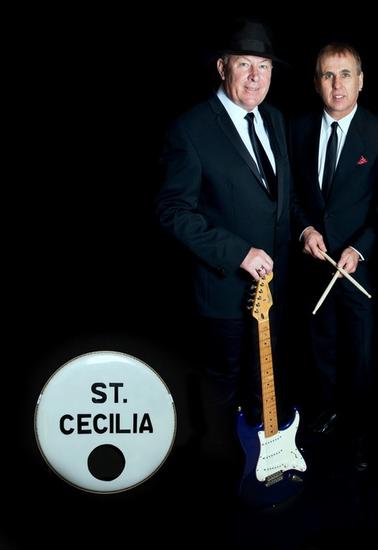 St Cecilia are a duo featuring Nigel “Woody” Woods formerly a member of Racey. Nigel has been with St Cecilia since 1973 and provides drums, bass and vocals.

Alongside Nigel is Eamonn Carr (lead guitar / keys / lead vocals / song-writer. Eamonn is a former member of Freddie & The Dreamers and has been a member of St.Cecilia since 1973.

St Cecilia gained notoriety in the early 1970’s with their UK number 4 hit single ” Leap Up and Down Wave Your Knickers in the Air “.It also achieved the number one slot in 14 differing countries around the world during 1980’s and 90’s on re-release.

During the early 70’s the BBC banned “Leap up and Down” although it was played regular by Jimmy Young and Alan Freeman.
The song was played extensively on Radio Luxembourg where it achieved major success throughout Europe and has continued to do so in many rap version styles.

The song was even mentioned during Sir Edward Heath’s ‘Prime Minister’s Questions’ when asked “Do you think this song should be banned” Ted replied “The song should not but any lady waving knickers in the air in public would be admired”.

In 1985 the BBC invited band without some original members to perform the song on The Noel Edmunds Show however much of the song was again edited.

During the early 1980’s they had more success on the American Billboard with “Want You To Want Me”
attaining a credited number 16.